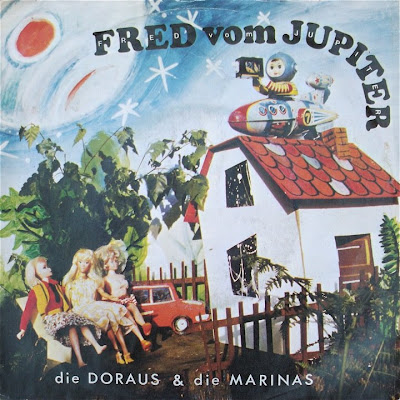 Here's a cute little sing-songy single courtesy German popstar Andreas Dorau. A big hit over there in 1981, it features a chorus of girls aged 11 to 14 (see back cover included in file) singing about um, Fred from Jupiter, I imagine.
The A-side is included on the seminal Neue Deutsche Welle comp Verschwende Deine Jugend which I posted earlier. The B-side is an inconsequential instrumental. So why the redundant post? Well, here you have the wonderful cover art by Moritz R. of Der Plan. But mainly because there is a connection to the Meatmen post from last week: Tesco Vee lifted the opening seconds of this record for the opening of the fake interview, 'Rock Icons' on the flexidisc. Which to me speaks volumes about the man's eclectic tastes (ABBA notwithstanding, haha). I mean, it's just a little thing, but how many people picked up on that over the years? Prolly me and two or three others. So there you go. More pointless trivia for you.

But it is a great single. Get it HERE.