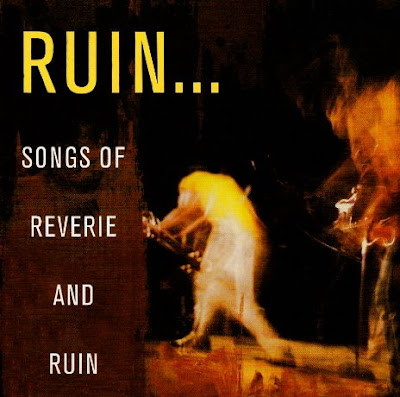 For my first offering to you, dear reader, I give you Ruin. A Philadelphia band from the mid-80's, Ruin were a phenomenal live band. One of the best I've ever seen and I've seen them all. They wore all white, lit prayer candles onstage before playing, then unleashed a titanic fury. They were heavily influenced by the likes of Black Sabbath at a time when that was anathema, long before "My War" or "Slip It In". Check their gargantuan version of the Stones' "Play With Fire". Their music has been called Buddhist Hardcore (see Gibby's quote in the Butthole Surfers chapter of "Our Band Could Be Your Life"). Whatever, it's great punk rock, great rock 'n' roll. They covered not one, but two Leonard Cohen songs, one on each album. Quoth Master Cohen (in Spin, back when it was half-decent): "On this new album by Ruin, they sing the first verse of the Master Song more or less as I sing it, but then they bring this world to it of every sound you ever heard and murder it, but as it should be murdered. It's a clean killing."
Here's a video of Ruin in action I shot in Philly in '96, a reunion celebrating the release of this CD:
Check out this video: Dionysian

Thanks for this collection. Never heard the 2nd album and some comp. tracks. Great band!

Ruin were incandescent. They were otherworldly -- phantoms, ghosts, bewildered gods. White clothes, black light, darkness, candles. I saw them maybe ten times in and around Philadelphia in the 80s. I wanted to have fun. But they were too disturbing. What were they saying with their sad songs and monster sound? The look on their faces -- I can still see that, and feel haunted. They rocked with a fury that I cannot fathom or describe. I think they meant to destroy the earth. Where are they now?

ruin are spread out around the world right now.. from west coast to nyc to philly to germany. but we are currently working on new stuff via the internet. sending around tracks etc. not sure what will happen.

That's great, Rich...aren't these comments awesome? People love discovering Ruin if they've only heard of them, and love re-discovering them.
You guys are pretty spread out now, eh? Last I heard from Cordy he was working in Munich...are you still in NYC?
--P

These guys were simply in a class by themselves...but I've heard a disturbing rumor - did their singer pass away? I hope this isn't true...

Thanks a lot for this excellent compilation ! :-D
Never heard this band before...

Saw Ruin many many times - have both LP's on vinyl (as well as the Philly HC Comp) - and I used to have this CD - but my car got broken into - and they stole my CD player and CD's - including this one. never thought I was going to get it again So MANY THANKS for the upload!!!

I was the guy doing sound at the Club for this reunion show clip (tho the vid clip audio doesn't do how good the band sounded at the show) I also did the earlier Ruba Club show gig as well.. (so wish I had at least done a board mix recording)...

of all the bands I've ever mixed and all the awesome bands and performers i've seen play and worked with in my long career, these guys blow all the rest off the stage hands down... they are a nuclear bomb brought to a knife fight...

hadn't seen Vosco (lead singer) around for many years but I was a hermit for a long time due to an extended illness... but I hadn't heard anything about him passing at all and I had just contacted someone associated with the band's facebook page and website about doing a full multitrack live recording if they ever do decided to do another reunion (as there was talk of it) and there was no mention of him passing... I hope that's just a rumor, He's such an all around great guy and we keep losing way too many of them!

thanks for this upload, my copy of the BlackHole Reissue got totally worn out and broken a long time ago.. I'd been meaning to ask Roadie about if he still had any copies but this works!